I’ve watched Bitcoin increase in U.S. dollar value nearly 300% in the last year. If ever I was subject to FOMO (fear of missing out), there was a strong pull in 2020; with Tesla stock and Bitcoin leading the charge.

First we need to define what Bitcoin – or any other crypto-currency – is: “A crypto-currency is a digital or virtual currency that is secured by cryptography, which makes it nearly impossible to counterfeit or double-spend. Many crypto-currencies are decentralized networks based on blockchain technology—a distributed ledger enforced by a disparate network of computers. A defining feature of crypto-currencies is that they are generally not issued by any central authority, rendering them theoretically immune to government interference or manipulation.”1

I consider Bitcoin a currency like paper dollars or gold coins. Bitcoin is more difficult to spend than paper dollars, but a lot easier to store and transfer than gold coins. Have you tried paying the Taco Bell drive through with an American Gold Eagle coin? Similarly, you’d likely starve if you expected the teen across the counter to trade you a gordita and a bean burrito for 0.00011 Bitcoin. Aside from untraced (sometimes criminal) activities, not many transactions happen with Bitcoin. However, with more transactions happening on the internet, Bitcoin is becoming a potential option for actual spending. If Amazon were to accept Bitcoin like they accept MasterCard or Visa, it would legitimize Bitcoin and other crypto-currencies. However, until the cyber security regulatory questions around crypto-currencies are answered, we may be waiting awhile for mainstream acceptance and usage.

Bitcoin as an investment

For now, let’s focus on Bitcoin as an investment. Is it an investment? Because the value fluctuates, it can be considered investable. Consider this volatility: 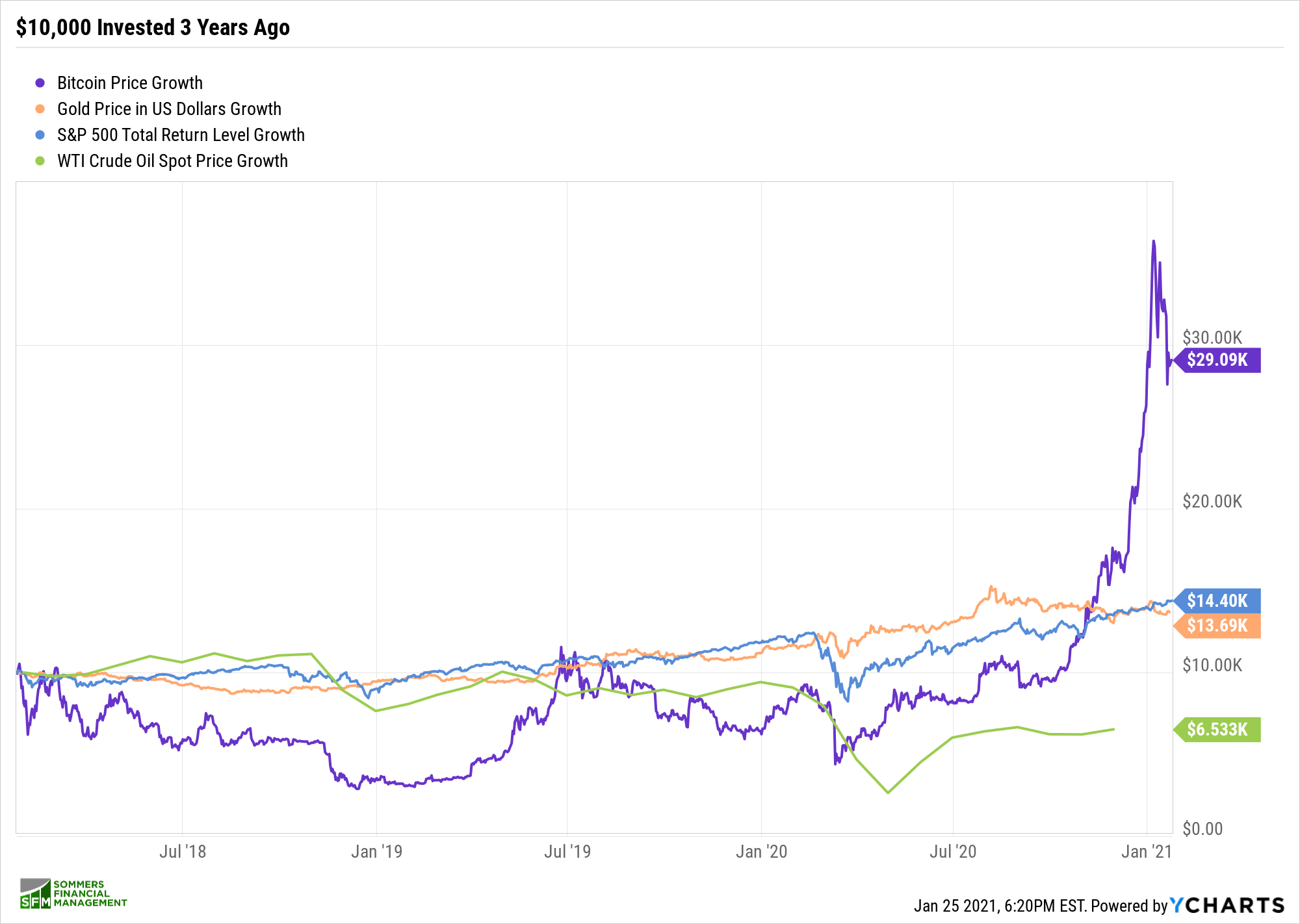 How to invest in Bitcoin

One of the big issues is “how do I invest in Bitcoin?” There are a couple of publicly traded companies whose business is to invest in or mine Bitcoin2, and you can buy their shares on the stock exchange. Unfortunately they often trade at a huge premium to the actual value of their Bitcoin holdings - or they're penny stocks that don't even deal in Bitcoin, but use the name to attract investors.

With an ETF, if the ETF owns $1 million of Bitcoin, the ETF shares would be worth $1 million. But with a company like Grayscale Bitcoin Trust, even though it’s worth only $1 million, traders bid the shares up to $1.5 million – meaning you’re paying a 50% premium on the value of the Bitcoin held in the trust. In 2018, GBTC traded at a 90% premium, although sanity has returned to the market and the premium has been steadily declining and is currently listed at only 4% (not bad, really).

If a legitimate asset manager (think Vanguard, iShares, First Trust) were to bring an ETF or mutual fund to market that trades at Net-Asset-Value – the actual market value of the Bitcoin held in the trust (as ETFs and mutual funds typically do) – it would be immediately and immensely popular. But until the SEC allows it, Bitcoin investing is done via imperfect, sometimes dark or scary markets.

Should you invest in Bitcoin?

When clients ask me if they should invest in Bitcoin, my typical answer is “not yet.” If you are feeling the pull of FOMO, you can always speculate with your “fun money” (poker money, vacation fund, lottery-ticket money, casino stash, Robinhood account, etc.). For now, we don’t have an efficient way to get our clients invested.

If you’re feeling like “fiat currency” and never-ending deficit spending by the U.S. Treasury is scaring you, consider Bitcoin and other crypto-currencies equivalent to anti-dollar investments. It’s really a way to hold currency other than paper U.S. dollars (either at home or in the bank). I often ask a client interested in Bitcoin (or physical gold): “How much actual cash do you keep at home and in your wallet? That’s the same amount of Bitcoin (gold coins/bars) you should probably have in your Coinbase wallet3 (safe at home).”

We can get you invested in other anti-dollar investments with far less volatility. For conservative investors, there are Treasury Inflation Protected Securities (TIPS).4 For moderate investors, there are inexpensive gold ETFs.5 Aggressive investors should consider commodities, international stocks, or leveraged real estate as anti-dollar inflation hedges. Until a mainstream mutual fund/ETF can give our clients exposure to the asset at face-value, we’ll wait and let the gamblers, criminals and speculators play in the crypto-currency sandbox.